In the News: How a Stay-at-Home Mom Filled a School with Art 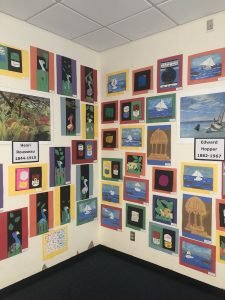 “Since I grew up in Europe, I was always surrounded by so much history,” says Cyndi Fuhrmann, Visual and Performing Arts Teacher at Village Elementary. “I remember going to London, and seeing the British museum, and being exposed to so much art.”

About five years ago, when Cyndi’s daughter Kaia was finishing up kindergarten, Cyndi decided to volunteer with the art teacher. But the art teacher had just been let go, due to lack of funding.

“How was I going to volunteer with the art teacher, when there was no art teacher?” said Cyndi. “So I went to my daughter’s first grade teacher to see how I could help. Around that time, I learned about Meet the Masters, a new art appreciation program the school was rolling out.”

Cyndi knew that the teachers were already busy implementing the Common Core curriculum, so she asked if she could teach an art lesson for Meet the Masters.

“I’ve worked as a teacher, and I knew it was going to be tough,” says Cyndi. “How in the world were these teachers going to implement Common Core as well as roll out this amazing new art program?”

The class went well, and soon almost all the teachers at Village Elementary were asking Cyndi if she could help them with art. She knew she had to call for reinforcements.

“I felt like we had enough parents out there that were passionate about the arts, and we could support the teachers and help them do the art program,” says Cyndi. “And that’s what we did.”

Things took off from there. Cyndi’s program went from about ten parent volunteers to 100. She knew the program was successful when every single student in the elementary school had participated, and she was able to showcase their work in an art show.

“The art show allowed us to celebrate that everyone is an artist,” said Cyndi. “It was super successful. We had about 500 people come through. I knew then, that I wasn’t just doing something I was passionate about…but that my work was having an impact.”

Soon, Cyndi was offered a job as the Visual and Performing Arts (VAPA) teacher at Village when the district received a grant for the position…